WebMD) Cancer may carry a scent that dogs can smell, a California study shows. 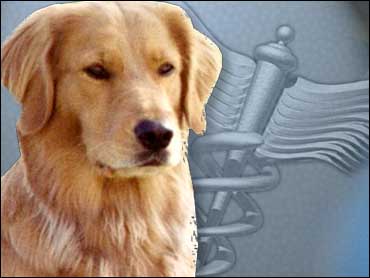 Researchers trained five dogs to identify breath samples from people with and without lung cancer or breast cancer.

The dogs were almost always right in sniffing out who did or didn’t have cancer, write the researchers.

They included Michael McCulloch, LAc, MPH. He works at the Pine Street Foundation, a nonprofit group in San Anselmo, Calif., that focuses on cancer patients and their treatment decisions.

The study will be published in the March issue of Integrated Cancer Therapies.

The dogs included males and females that were 7 to 18 months old and had had basic obedience training.

The researchers trained the dogs to smell the difference between breath samples of people with and without lung or breast cancer. The people had breathed into special tubes that captured their breath.

During training, the dogs’ accuracy was rewarded with food.

The Scent of Cancer

McCulloch’s team had heard anecdotal reports of dogs detecting cancer in people. Dogs have an extremely keen sense of smell, picking up odors people don’t notice. Just watch a dog trot along a sidewalk with its nose to the ground, sniffing everything in its path.

Is cancer sniffable? Not for people but maybe for dogs, McCulloch’s study suggests.

A host of chemicals are involved in cancer, and scientists are working to create lab tests that flag fledgling cancers. So far, that goal has often been out of reach.

Maybe dogs would do better, McCulloch and colleagues reasoned. They set out to see if dogs can be trained to smell cancer. If so, dogs might improve early cancer detection, which can improve survival.

The big challenge came two or three weeks after training. One at a time, the dogs were led into a room full of breath samples they hadn’t sniffed before.

None of the cancer patients had had chemotherapy, since chemo might have changed the chemicals in the patients’ breath. The samples were held in the same sort of tube used during the dogs’ training.

The dogs’ job: Lie down in front of the cancer patients’ breath samples and ignore samples from people without cancer. This time, the dogs were rewarded with praise after leaving the room. The dogs’ handlers and observers didn’t know which samples came from the cancer patients.

The dogs were almost always right in telling who did and who didn’t have cancer, the study shows.

Some breath samples came from smokers, but that didn’t throw off the dogs, the researchers report. They call for further tests to see if food smells in breath samples make a difference or if the dogs had actually sensed another condition, like inflammation, that only the cancer patients had.

Can Your Pet Help?

Other researchers in Florida, the U.K., Japan, and Australia are also working on similar topics, according to the Pine Street Foundation’s web site.

The dogs in McCulloch’s experiment aren’t available to “screen” patients. “At this time, it is also not recommended that dogs be used as a primary screening method for cancer,” the foundation’s web site states.

However, the foundation recommends medical follow-up for people whose dogs display “persistent and animated behavior around specific body locations on their owners.”

Training your dog to smell cancer requires special breath samples from cancer patients. Those samples aren’t that easy to get and scientific, legal, and ethical issues must also be addressed before training dogs, the foundation states.